This year, FIBA Media has developed the biggest and most ambitious TV, digital and social media coverage global production plan for the tournament ever. A joint venture between DAZN Group and FIBA, FIBA Media is striving to raise the overall standard of delivery, graphic, production, and coverage of basketball all around the world.

We spoke to FIBA Media Managing Director, Paul Stimpson, about the partnership and the precedent this basketball World Cup is setting for future events.

What’s your role in FIBA and your relationship with world basketball?

I am the Managing Director of FIBA Media that is the entity set up through the 17-year media rights agreement between DAZN and FIBA for the 2017-2033 period. FIBA Media does the following: 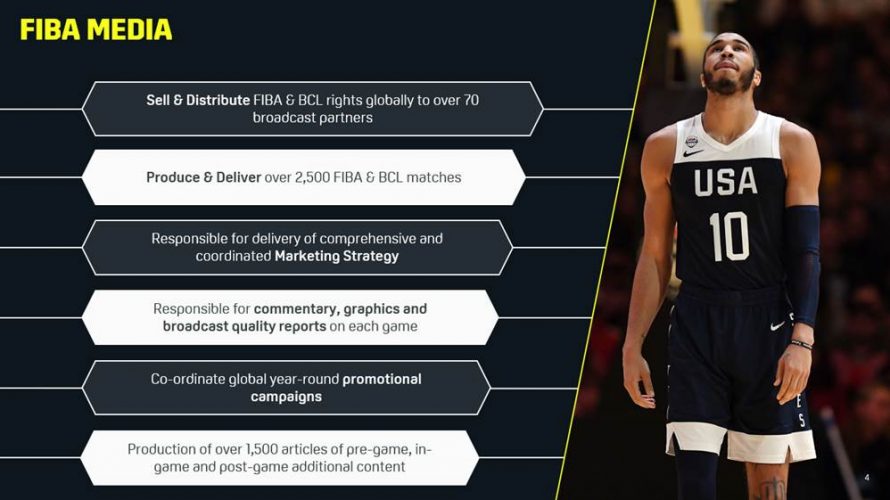 With augmented reality (AR) graphics, referee-audio and a broadcast SuperFeed, do you think FIBA has raised the bar for basketball broadcasting?

The production of the current FIBA Basketball World Cup is the biggest and most extensive ever for basketball. The world-first innovations, especially the railcam and referee audio, have brought very positive comments from both broadcasters and fans around the world. The augmented reality graphics that will be introduced for the finals in Beijing will raise the bar even further, giving the audience cutting edge technology while the best of the best battle it out.

What does partnering with a world-leading OTT service like DAZN do for FIBA and the World Cup tournament?

DAZN is partnering FIBA in three countries and showing extensive coverage in Canada, Japan and Spain. The OTT service, together with FIBA’s own Live BasketballTV platform which is also operated by DAZN, gives fans more games to watch than ever before. What’s also great to see from DAZN is the number of devices fans can watch the sport on. Whether they’re sitting at home in front of the TV, or on the go, they never have to miss a minute of the tournament.

How can basketball continue to grow as a sport around the world?

Basketball is the second biggest team sport in the world and is already hugely popular on a global basis. For example, it is the top viewed sport in China, Lithuania and the Philippines and the FIBA Basketball World Cup will only deliver bigger audiences and awareness around the world. We’re already seeing amazing growth, the total audience in China alone has already exceeded a billion through coverage on CCTV and digitally on Tencent. With the extensive and one of a kind coverage, at FIBA we think that basketball around the world can be taken to the next level.

As Turkey nearly edged out favourites U.S. in the group stage, what’s your verdict on the rest of the tournament?

This year’s FIBA Basketball World Cup is the most open for many years, with numerous countries feeling that they have a chance to win the title. As the 16 qualified teams play in the second-round games it’s all about getting to the quarterfinals in Shanghai and Dongguan where it becomes do-or-die with the winners going to Beijing for the Finals.

For those 16 teams that haven’t made it through, they are now playing in the classification round where the top eight teams in places 17-24 will qualify for the 2020 Olympic Qualifying Tournaments – giving them a last chance to still make the Tokyo Olympics.

Stay tuned to see who ends up being crowned the 2019 FIBA Basketball World Cup Champion!